The miraculous image of Our Lady of Guadalupe

“It is through the Blessed Virgin Mary that Jesus-Christ came into the world; and it is also through her that He must reign in the world.”

A striking example : The history of Our Lady of Guadalupe in Mexico 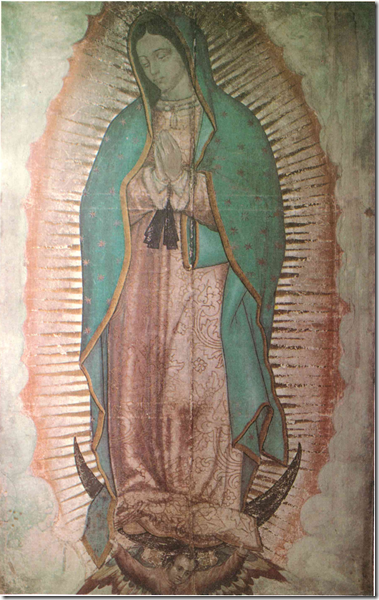 In Mexico of the 16th century, the native-Indians living in the country were reduced to semi-slavery by the Aztecs that used them for their human sacrifices .

For example, in 1487, for the dedication of a temple in Mexico, the Aztec wizards massacred 80,000 young Indians: one person was killed every fifteen seconds on one of the four stone altars at the top of a pyramid, 45 m high: they cut open their ribcage to tear their hearts still palpitating.

On April 22, 1519, Good Friday, Hernando Cortez landed on the Mexican coast, from Cuba with a small fleet of ships with black cross sails, bringing 550 men including two priests.  As soon as the victory was over, he destroyed the statue of the Aztec god Huitzilopochtli, replaced it with an image of Our Lady, cleansed the human blood of the temple, and buried the 100,000 human skulls impaled at the foot of the pyramid of Mexico.

Despite the arrival of the Franciscans in 1524 and the first bishop of Mexico, Msgr de Zumarraga, conversions and baptisms were very rare. The Indians believed that Catholicism was a religion for white people only, and their pagan beliefs persisted in their souls.

But the course of things would change radically when the Mother of God, Our Lady of Guadalupe, appeared in person, in December 1531, in Tépeyac, a hill near Mexico, to an Indian named Juan Diego.  Juan Diego was born in 1474 near Mexico City. He had been one of the first to ask the Franciscan Brothers to educate him, and he was baptized in 1525.

On December 9, the Blessed Virgin had appeared to Juan Diego, asking him to build a Chapel on Tepeyac hill, with the permission of the bishop of Mexico, so that all his children would come to her.

After various vicissitudes, the bishop finally asked for a sign to be sure of the divine origin of the apparition.    As a miraculous sign, the Virgin Mary made Castilian roses grow on the hill, and asked Juan Diego to pick them. “All these flowers will be the sign that you will bear to the bishop“, she said to him!  Juan took the roses in his tilma (Indian poncho); then went to see the bishop.  When he unfolded his tilma before the bishop, the miraculous image of the Virgin was printed on the fabric.  All fell prostrate on their knees to contemplate this image from Heaven.

Marvelous properties of the image

Firstly, the image provoked the conversion of Mexico.  On December 26, 1531, there was a procession to Mount Tepeyac, where many Chichimecian Indians met; they played with their bow and arrow and danced according to their customs.  On this occasion, an arrow shot at random pierced the throat of an Indian who accompanied the “Mantle”.   He died instantly.  The arrow was removed in front of the image, a scar was immediately formed, and the Indian resuscitated.  Nine million Indians converted to Catholicism.

— The image is scientifically inexplicable

Various scientific analyses have been performed.  In one, in 1979, two NASA scientists members proved that there is no painting in the original poncho and that it is not a photograph that would have printed the fabric.

Two angels were later painted by the image of Our Lady outside the rays, but thirty days later they disappeared and today, thanks to highly specialized and sophisticated tools we can find the trace.

NASA scientists also discovered that by passing a laser beam laterally on the canvas, the ray passes without touching the paint or the canvas so that the image is suspended in the air at three tenths of a millimeter above the fabric.

— The image is miraculously protected

The tilma measures 1.71 high on 1.05 wide. It is made of plant fibers of cactus (maguey).  In the eighteenth century, a very similar copy of the original was made with the same name: some fifteen years later, the copy was reduced to dust, while the original has already lasted nearly 500 years.

In 1791, Muriatic acid fell on the upper right side with a proportion of 50% nitric acid and 50% hydrochloric acid, making a hole 10 cm in diameter. Thirty days after, the tissue was restored without anyone intervening to repair the accident.  Even today, it remains a mark of the task and only by means of a precision instrument can one observe traces of burning.

On November 14, 1921, a stonemason Lucien Perez, an anarchist, laid a bouquet of flowers at the foot of the tilma, in which he had put a load of dynamite which destroyed all around, but left intact the poncho as well as the window pane.

In 1956, the ophthalmologist doctor Bueno discovered that by approaching a light nearer to the eyes of the image, the pupils closed; and by removing the light, the pupils dilated again as if they were living human eyes.

In July 1956, Dr. Lavoignet, after eight months of intensive work, discovered the optical phenomenon of the triple image of Purkinge-Samson, which corresponds to what the human eye perceives, that is to say, the three refractions of the object seen.

In 1979, it was found that the tilma keeps without any explanation the temperature of the human body oscillating around 36.6 ° -37 °.

Finally. a gynecologist, by putting his stethoscope upon the image, on the belt of the Holy Virgin Mary who is pregnant, heard the heartbeat and noted that they came to 115-120 heartbeats in minute, what corresponds to the cardiac-beating of the heart of the Child Jesus, just as those of the foetus in the breast of his mother!