The Year of Luther

“What unites us is greater than what divides us” ?

“In 2017, Lutherans and Catholics will celebrate together the 500th anniversary of the start of the Reformation.  Today, Lutherans and Catholics have the joy of understanding each other better and better, and of cooperating and respecting each other more and more. They have finally recognized that what unites them is greater than what divides them.”

[“From Conflict to Communion”, report from the Lutheran-Catholic Commission (2013), of which Card. Müller, Prefect for the Cong. of the Doctrine of the Faith, is a member]

Last October 31st, the Pope was in Sweden to inaugurate “The Year of Luther” with the Lutherans.  He signed a joint declaration with the representative of Lutheranism in which he repeats this sophism: “What unites us is greater than what divides us”.

Protestants do not have divine Faith;  they believe in Luther, but they do not believe in God.  Regarding this point, let us quote the Catechism of the Crisis in the Church:

“He who denies even just one single dogma has lost the Faith.  This is because he does not accept Revelation from God, but establishes himself the judge of what must be believed.”

●   Isn’t it possible to deny one dogma while continuing to believe the others, and therefore – at least partially – conserve the virtue of Faith?

“… [H]e who dissents even in one point from divinely revealed truth absolutely rejects all faith, since he thereby refuses to honor God as the supreme truth and the formal motive of faith” [Leo XIII, Satis Cognitum, 1896].  Pope Leo XIII then quotes St. Augustine, speaking of heretics:  “In many things they are with me, in a few things not with me; but in those few things in which they are not with me the many things in which they are, will not profit them”.

●  What should we think of this oft-repeated slogan according to which, in our relations with “separated Christians”, we must consider what unites us rather than what divides us?

In matters of Faith, it is absolutely false and contrary to the traditional teaching of the Church to say that we must “consider what unites us rather than what divides us”.   This would give the impression that these differences only concern details of little importance, whereas, in reality, it is a question of the fullness of revealed truth.

[Fr. Matthias GAUDRON, Catechism of the Crisis in the Church]

We have in common with the Protestants our human nature, and, perhaps, a few natural virtues, but Protestants have neither the true Faith, nor supernatural Hope, nor infused Charity [except in the case of invincible ignorance, if a Protestant is Protestant in name only, through no fault of his own, being ready to accept all the dogmas of the Catholic Church, and therefore being already Catholic in his heart]. That constitutes an enormous division!  In Heaven, there are only Catholics; there are no Protestants, because to be saved one must have the true Faith: “He that believeth and is baptized, shall be saved, but he that believeth not shall be condemned” [Mk. 16:16].   Between the two, as Our Lord says in the Gospel, “there is a great abyss, so that they who would pass from hence, cannot, nor from thence come hither” [Lk. 16:26].   Such is the Gospel truth: between Catholics and Protestants there is a vast chasm which cannot be crossed.  Of course, during this life, it may be crossed if the Protestant comes back to the Church, but after death, it is too late.

As a monk, Luther had a tortured conscience, feeling separated from God.  Was it a temptation, a scruple, or was he just not making enough of an effort to stay in the grace of God?  Whatever the case may be, since he felt unable to change himself, he decided to change religion: it was much easier.  From now on, it was no longer necessary to serve God, to obey Him, for that was “impossible”; it was sufficient to have “confidence” in Christ, and all was well.  The Dictionary of Catholic Theology thus exposes the doctrine of Luther:

Over our corrupt souls, God places a “mantle”, that is, the merits of Jesus Christ.  This “justification” is entirely exterior, a marble covering over the rotten wood of a cabin.  In the work of our salvation, Jesus Christ – and Jesus Christ alone – is active, and we have no part in it; it would be an insult to want to cooperate by our works in what He has over-abundantly accomplished.  And how does one obtain this “mantle”?   […]  By Faith – or, to be exact – by confidence in Jesus Christ.  The soul will continue to produce fruits of death, but thanks to the confidence in his heart, the sinner will merit that God may “attribute” to him the merits of Jesus Christ.

The year of Fatima

The Blessed Virgin is an “anti-Luther”.  Luther claimed that it is impossible to obey God; Our Lady, whose motto is “fiat”, tells us to “do whatsoever He shall say to you” (John 2:5).  At Fatima, the Blessed Virgin exhorts sinners to convert, and change their lives.

What’s more, Our Lady gives us the means to do so with the devotion of the Five First Saturdays.  Doing (and living) this devotion is the best way to celebrate this centenary, and to make reparation for the scandalous “Year of Luther”.

September 18th:  Resumption of their priestly studies for the Scholastic Brothers and the Seminarians, and resumption of activities for the Third Order.

Fathers Marie-Dominique and Marie-Laurent are in Paris for the first meeting of the year for the Fraternity of St. Thomas, which groups together our tertiaries from Normandy, Paris, and Chartres, accompanied by their many children.  Mass, Divine Office, Rosary, alternate with instructions on spirituality and doctrine, in a family atmosphere.  In the following weeks, it will be the turn of the other Fraternities in Alsace, Brittany, Avrillé, and Lyons.

Why belong to the Third Order?  It provides a rule of life to better sanctify yourself while living in the world; it allows you to benefit from the spiritual support of a religious order and the fraternal Charity of other tertiaries.

September 20th:  Father Angelico begins a new year of his bi-monthly adult catechism classes on Bible History.  The study of the Old Testament using commentaries of the Fathers of the Church is an excellent way to enrich our spiritual life, according to St. Paul: “…all these things happened to them in figure: and they are written for our correction” (I Cor. 10:11).

October 2nd:  Fathers Marie-Laurent and Reginald resume their apostolate among the students of the military academy at La Flèche: confessions, Mass, conference.  This year they will be studying the fundamental book “Liberalism is a Sin”, by Don Sarda y Salvani.

October 8th:  Meeting of the “Saint Raphael Circle” for medical students, nurses and physical therapists, with Fathers Marie-Dominique and Hyacinthe-Marie.  Today the topic is “abortion and its consequences”.

October 22nd:  Feast of the Dedication (Consecration of our Church). “In the world, you were known as Maximilien;  in the Order, you will be called Brother Michel-Marie, under the protection of the leader of the Heavenly Militia.”  A new brother is born into our community.  “The Popes have asked us to be ‘fighters for the Faith’”, comments Father Prior.  “Fight using the ‘arms of light’: zeal in spreading the Gospel, “the shield of Faith, wherewith you may be able to extinguish all the fiery darts of the most wicked one… the sword of the Word of God” (Eph. 6:16).

December 2nd-5th:  Father Angelico is in Ireland for Masses and preaching in Longford and Dublin.

December 8th:  Feast of the Immaculate Conception.  After a Solemn High Mass in the majestic setting of “Saint John’s Hospice” (13th cen.), the clergy and faithful go into the streets of Angers for a candle-light procession in honor of the Blessed Virgin Mary. 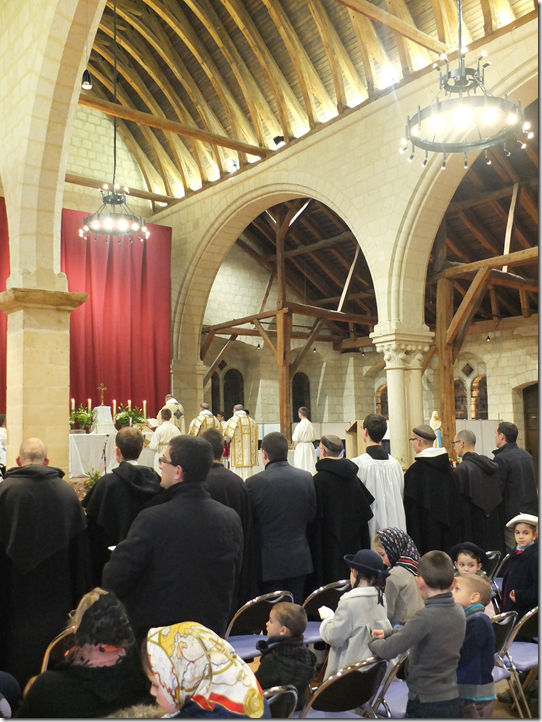 “We have a very certain hope and complete confidence that the most Blessed Virgin will ensure by her most powerful patronage that all difficulties be removed and all errors dissipated, so that our Holy Mother the Catholic Church may flourish daily more and more throughout all the nations and countries, and may reign “from sea to sea and from the river to the ends of the earth…” [Pope Pius IX, Ineffabilis Deus]  This is our hope as well, as we approach the 100th anniversary of the apparitions of Our Lady of Fatima.

The furnishing of the Chapter room in the eastern wing of the Friary is under way. Soon, the oak beams will be installed in the ceiling, and the wooden gothic altar (which has been patiently waiting for several years) will be mounted.

The projects for the Friary workshops and cafeteria for the Boys’ school are presently being studied by the architect, in view of obtaining the necessary construction permits. This work will enable us to put the guest house back to its proper use, as it is currently occupied in large part by the school (for its kitchen, bathrooms, dining room…).

At the “Priory” (the manor house which is used for the Boys’ school), the excavation of the old “towers” is continuing, and we are in negotiations with the Historical Monuments Department to get the permission to transform them into study halls. 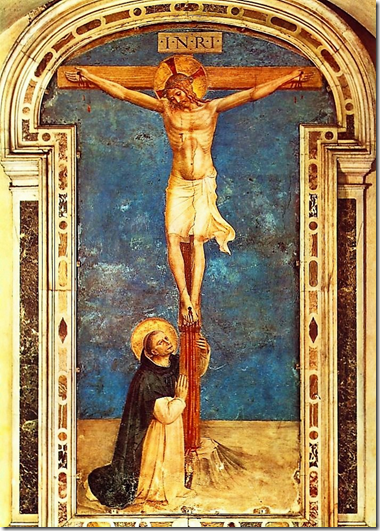