admin In defense of our convent, The Fight for the Faith January 2, 2015Bishop de Galarreta, Bishop Fellay, Fr. Albert

An article called “A New Dominican Community” was published on October 24, 2014 on the SSPX USA web site1.  Here are the principle passages with some added commentary.

In his turn, on 31 October, Fr. Albert sent a letter to the Avrillé Tertiaries living in the United States, warning them against the Avrillé friary and asking the same Tertiaries to join his Third Order.

Start of the article appearing on the SSPX-USA web site: 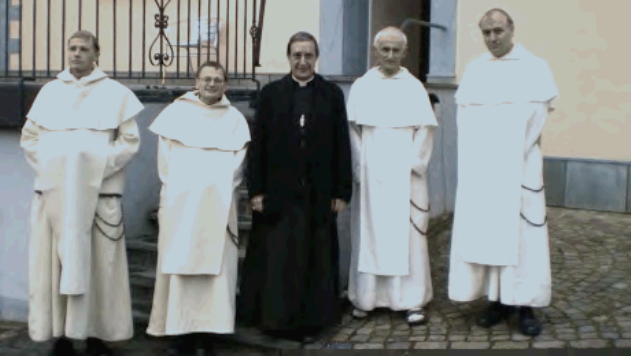 “Find out about a new traditional religious community, the Dominican Friars of Steffeshausen, Belgium, and see how you can help them… or even join the Third Order of St. Dominic.

A video has just been posted about a new foundation of traditional Dominican friars in Belgium and the Third Order that they are offering to the faithful.

This new community of traditional Dominican friars was founded on November 15, 2013 in Steffeshausen, a little village in the southeast corner of Belgium. They were invited there by the villagers after the death of their parish priest, who had kept the traditional Mass and was persecuted by his bishop some 25 years ago.

They offered the church and rectory built by this priest to these friars as a first home for their fledgling community.”

Our Commentary: The Steffeshausen house was not offered to these four priests, but to the Avrillé Dominicans.  Here are the facts:

On 26 January 2013, during a meeting in Suresnes, in the presence of Fr. de Cacqueray [then District Superior of France], Bishop Fellay asked the Avrillé Dominicans to bring together five “vagus” Dominicans (all perpetually professed to the Avrillé friary) in a house which would be under the jurisdiction of Avrillé. That day, Bishop Fellay promised to support that foundation with his authority and to tell the religious who would refuse to submit that they must remove the habit or they would no longer be recognized as Dominicans by the Society of St. Pius X.

The Avrillé Dominicans accepted this decision. A committee of lay people who were taking care of the house of Steffeshausen contacted the Avrillé Dominicans early February 2013 offering to hand over this house, so the fathers proposed to Bishop Fellay that the foundation be made there. The bishop accepted, and contacted the five religious to offer to install them in this house.

However, in June 2013, Bishop de Galarreta told Avrillé that it was he who would take this foundation under his authority. When the fathers told him that Bishop Fellay had promised that the foundation would be instituted under the authority of Avrillé, Bishop de Galarreta answered, “Bishop Fellay considers himself to be relieved of his promise.” He declined to comment further and referred to Bishop Fellay. Father Prior of Avrillé then wrote three letters to Bishop Fellay on 14 July, 26 July and 11 August 2013 (the last of which was personally delivered by Fr. de Cacqueray) asking for explanations— he has never received a response.

“Bishop Alfonso de Galarreta, who assists those religious communities affiliated with the SSPX, accepted to help the foundation as its ecclesiastical superior. You can help the Dominicans by making a donation . . . On their behalf, thank you very much for your support!”

(End of the text from the web site of the SSPX-USA.)

Our Commentary: The Dominican Order, which is an exempt Order, has never been put under the jurisdiction of a bishop.

What’s more, being a bishop without jurisdiction, Bishop de Galaretta’s action of removing the five religious from their legitimate superior, without that superior’s agreement, is an illegitimate act and indicates a schismatic mentality by attributing to the bishops consecrated by Archbishop Lefebvre a jurisdiction they do not have and which Archbishop Lefebvre never wanted to give to them because he himself did not have it, as he so often said.

In the video presented with this article, Fr. Albert recounts his history and very rapidly skims over the 19 years of his life that he spent with “some traditional Dominicans in France,” omitting to say that he was a part of the Avrillé community, that he studied there, that he received all his ecclesiastical orders from as a member of this community and that he made a vow of perpetual obedience between the hands of the prior of Avrillé. He also forgets to tell that he was sent to the United States in 2006 by his superiors in Avrillé, on the recommendation of Bishop Fellay, and that afterwards he refused to return to the Avrillé friary where his superiors still wait for him. He also keeps quiet about the situation of the four other religious, all perpetually professed to Avrillé, of whom three left the friary in the middle of the night of 11-12 April 2011 with the complicity of the German SSPX District Superior, Fr. Franz Schmidberger. There are many lapses of memory and much silence in the telling of this tale.

This foundation, made on dishonesty and disobedience, is a violation of religious law.

But above all, in the current context, it is a maneuver by Menzingen to weaken the Avrillé community and to have a nice, happy community of Menzingen Dominicans, who neither bark nor bite.