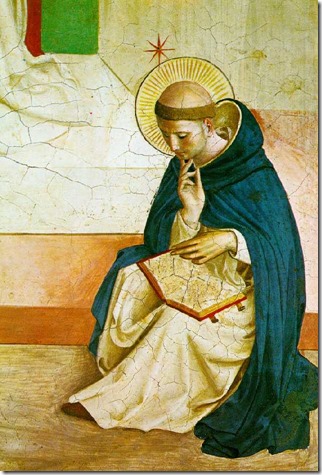 Knight of the Truth

Saint Dominic’s chief glory among men lies in the broad and free spirit bequeathed to the threefold religious family of friars, nuns and tertiaries which perpetuates in our times the apostolate of spreading of the Truth and of fight against the errors and against those who spread them, inaugurated by him in the thirteenth century.

What, then, was this spirit which he gave to his followers and which is the special mark of his genius ?

Briefly, we may say the essence of this spirit is embodied in his intellectual ideal, which distinguished Saint Dominic among the great leaders who, by several fashions of religious life, have founded in the Church institutes to lead souls Godward.

By no mere accident the motto of his religious family is « Truth », for this word touches the magic appeal of saint Dominic’s heart. Were we to choose a text to express the peculiar mold of his genius, we could find none better than the Saviour’s words : « The Truth shall make you free » (Jn 8, 32). He aimed at truth and attained freedom of soul. Consequently, he zealously fought against the errors which destroyed truth in the souls : a good pastor doesn’t only gives pasture to his flock. He also protects it against the wolves. If not, he cannot be called a good pastor. He is a mercenary !

The long student life of Saint Dominic at Palencia (Spanish famous University of this time), his years of contemplation as canon of the cathedral of Osma (Spain), his apostolic preaching in Languedoc (south of France) against the Cathars, his dispersion of the brethren (August 15, 1217) to the University centers just after the foundation of the Order (December 22, 1216), and finally the astounding influence which his friars straightway exercised at these power-houses of learning – all these facts bring out strikingly clear the intellectual mission of Saint Dominic and of the Order he founded.

And moreover, was it not this mark of his genius that, in the thirteenth century, charmed the most virile intellect of Europe, Saint Thomas Aquinas ?

The secret of Saint Dominic’s holiness, then, was his fast-knit friendship with Christ, who is the Truth, the model of perfect spiritual freedom, the freedom of the children of God.

(From the book Dominican saints, by Dominican novices, Washington D.C., The Rosary Press, Dominican Publications, 1921.  Slightly revised by the Dominican Fathers of Avrillé.)