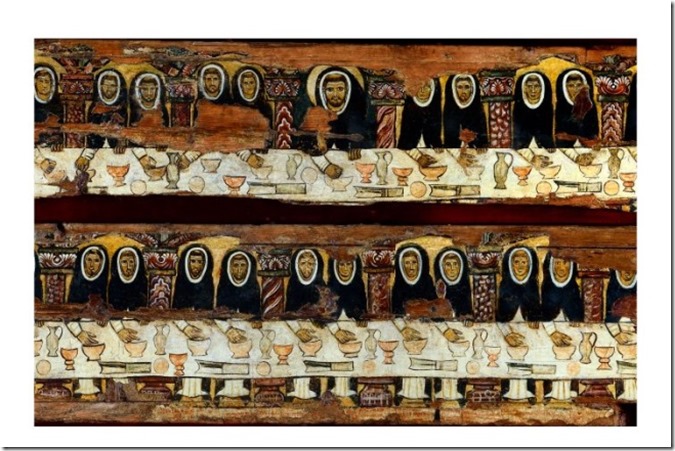 The Tavola, one of the first paintings of Saint Dominic, surrounded by his Brothers at table.

Motto of the Dominican Order

For the 800th anniversary of Saint Dominic’s birth into Heaven (August 6, 1221), let us give a few explanations on the motto of his Order: VERITAS. From the very beginning our Order has been faithful to the Truth and throughout the centuries the Dominicans have considered it as their first title of nobility. In 1266, Pope Clement IV, wanting to define the Dominican vocation officially proclaimed the Order of Saint Dominic “the keeper of Truth.” This means that above all we were founded to defend and spread the truth. The Dominican apostolate is essentially doctrinal and our first work is an intellectual one.

The intellect, handmaid of man, must establish our minds in truth and enable man to practice virtue. Without the base of truth, the will can lean on nothing solid to make resolutions. Whoever despises the intellect and truth removes from man his first force against the powers of disorder. It is a great misfortune that in Catholic preaching sentiment takes the place of the idea. The result is a piety without order which produces unbalanced souls, who only ask for the sensible in the mysteries of Faith. Joseph de Maistre wrote, “Man is only worth what he believes,” and Bonald “dogmas make people.”

Thus the Dominican wants above all to be a sower of truth, and to spread light. Before stimulating men, he wants to enlighten them. Confident in the Divine sense which Baptism has planted in the Christian soul, he does not fear to expose the highest truths even to the crowds, which he endeavors to bring to the heights of Christianity. He is persuaded that he will only bring the hearts of men to Christ by revealing God as much as God has revealed Himself.

A necessary consequence is that the Dominican spirit is without mercy for error. The measure of one’s love for Truth is the measure of one’s hatred for error. History shows the Dominican Order detesting heresy and pursuing it tenaciously to the point that we could summarize these 800 years as a long combat with error. Today, however, a despicable doctrinal liberalism makes all ideas equal, giving the same rights to both truth and error. Nothing is more hateful than this false modern tolerance. Error has no rights, except to disappear.

Far from hurting the apostolate, this doctrinal intolerance fructifies it. What is the first need of modern souls, lost in the complexity of systems without harmony and unity? Doctrine! Is there such a thing as a “modern” soul? No, there are simply ruined intellects. The Dominican applies himself to restore order, bring back the exiled truth, generous and magnificent Queen. In her escort, she will bring back all our old lost Christian glories.

“My very dear brothers, this is what I leave to you as a possession to be held by right of inheritance by you, my children. Have charity, preserve humility, and possess voluntary poverty.”

Such was the testament of Our Father St. Dominic on August 6, 1221. “Do not weep, I will be more useful after my death than I was during my life,” he added before giving his soul to God.

A little beforehand, after making his general confession to Brother Ventura, he told the Brothers around him, “The mercy of God has conserved until this day my flesh pure and stainless. If you want this same grace, avoid all suspicious occasions. The way in which this virtue is kept makes the servant agreeable to Our Lord and gives him glory and credit before people. Keep serving God in the fervor of the spirit, apply yourselves to uphold and spread this Order which has only started, be constant in holiness, in regular observance and grow in virtue.”

After 800 years we can notice that this inheritance has been transmitted from generation to generation. The Order has had to be reformed many times because of human weakness, but has never ceased to produce Saints and to preach the Sacred Truth.

More than ever the harvest is great and the laborers few. Hence to celebrate St. Dominic this year, we dare ask all our friends to storm Heaven with their prayers for Dominican vocations.

The Religion of Medicine and the credulity of skeptics

Medicine holds a high place in the society of skeptics. The more man distances himself from Christian virtues, the more he attaches himself to life. Whether he believes to return to nothing, or the thought of an afterlife comes to torment him, to live a long time is his principal affair, since his nature abhors nothing and his conscience fears eternity.

He fears sickness not only because it is the privation of pleasure, the only happiness to which he looks for, not only because it causes pain, of which he ignores the price and against which his soul is powerless, but because it is the announcement or threat of this death which will either destroy him completely like an animal or perhaps deliver him to perish in the hands of the Supreme Justice. As long as he is well, he is voluntarily skeptical, and irreverent towards the art of healing, at the first sign of sickness, medicine becomes his only hope. He delivers himself to medicine docile to the point of cowardice, gullible to the point of stupidity.

The Religion of medicine knows no atheist among those who deny the rest. How often do we not see these people, mocking religious practices and abstinence, who as soon as they have a real or imaginary disease become sober, chaste, flee the world and its seductions, make a retreat to the countryside, and pilgrimages far off […]. There is nothing that medicine cannot obtain from them. Their body which gives them so many worries is submitted to penances without number. They pay and swallow without complaining the worst drugs, they stay in prison, and they walk vigorously through the countryside, whip themselves, exile themselves, or even go into icy or putrid waters. What will they not do?

If the doctor told them to spend every day two hours kneeling on a kneeler before a lighted candle, certainly they would fill our churches and force the State to build new ones.

February 14th: Our senior class leaves for their pilgrimage to Rome accompanied by Father Terence. Because of the present circumstances the churches are rather empty, which thus allows a greater recollection for prayer.

February 27th: His Excellency Bishop Faure confers the tonsure on our Brothers Pie-Marie and Marie-Thomas as well as the second minor orders upon Brother Augustine-Marie.

April 21st: All the brothers available are called on to help plant 2500 potato seedlings in our garden.

May 23rd: Several of our Fathers are absent to accompany pilgrimages for the feast of Pentecost, for example at Ile Bouchard or Vézelay.

June 3rd: Father Prior represents the community at Riddes in Switzerland for the 60th anniversary of Father Epiney’s priestly ordination. Father Epiney is the priest who “welcomed” Archbishop Lefebvre to Ecône when the seminary was founded because Ecône is geographically in the parish of Riddes. Father has remained faithful despite many persecutions and trials over these 60 years.

June 19th: Part of the community assists at the ordinations conferred by His Excellency Bishop Faure at Morannes (about 45 minutes from our friary). Rev. Fr. Chirico (from Italy) was ordained to the priesthood and Rev. Mr. Nass (from Brazil) was ordained to the diaconate. Both of them followed their studies at our friary. 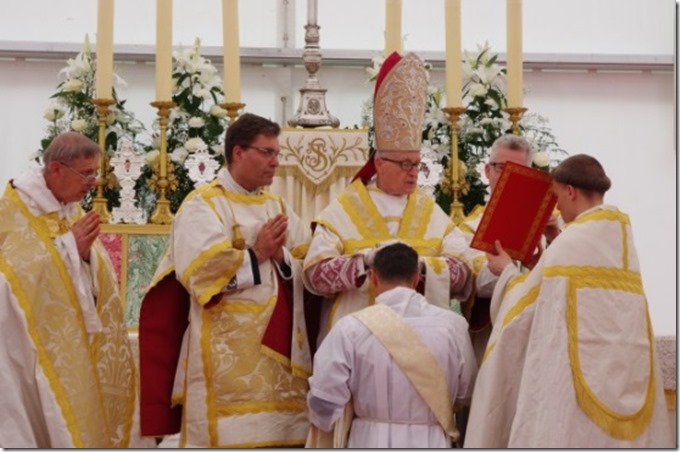 July 4th: Fathers Innocent-Marie, Marie-Dominique and Emmanuel-Marie participate at the 50th anniversary celebration of the MJCF (a French Catholic youth movement for apostolate). Many conversions and vocations have come from this movement. The first members of our Dominican community also come from this youth group.

July: Among our summer apostolate there are two retreats (one men’s and one ladies’) and also several camps for young boys and young girls. It is an example of the Dominican life that preaches in all circumstances (from a Sunday sermon to classes in a school, from a spiritual retreat to two weeks in the mountains for a summer camp).

August 4th: This year it is the 800th anniversary of our Holy Father Saint Dominic’s entrance into Heaven (August 6th, 1221). His Excellency Bishop Faure honors us with his presence to help celebrate the occasion with a Pontifical High Mass and a conference on the present day crisis. In the evening our annual retreat begins preached by Father Dominique Rousseau on the mystery of the Transfiguration.

August 14th: For the Vigil of the Assumption our Brother Vincent makes his first vows while Brother Augustine-Marie renews his. As for Brother Jean, he makes his perpetual profession in the Third Order as an oblate brother. 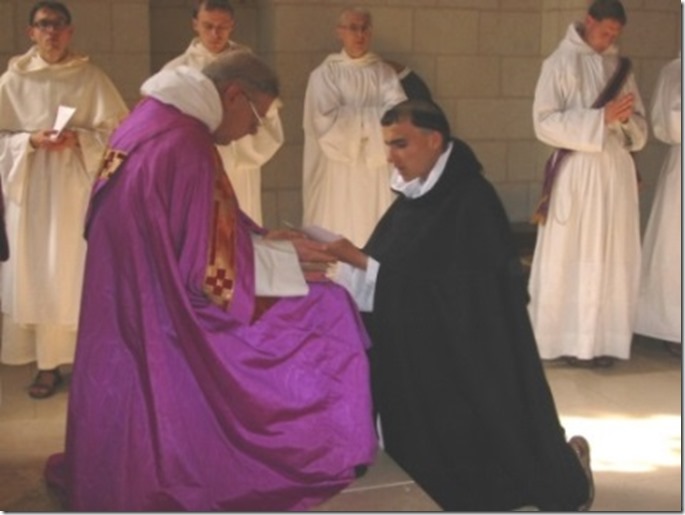 August 15th: Procession in honor of Our Lady through the streets of the neighborhood.

August 18th: Father Marie-Laurent leaves for a few days of apostolate in Prague and its surroundings.

August 19th: Father Alain accompanies our tertiaries on a pilgrimage in the footsteps of Saint Dominic at Fanjeaux.

August 22nd: For the feast of the Immaculate Heart of Mary, Miss Juniper Figueroa (from St. Mary’s, Kansas) received the Dominican habit in the young community of teaching sisters just five minutes from our friary. Her name is now Sister Catherine-Marie (in honor of St. Catherine of Ricci). 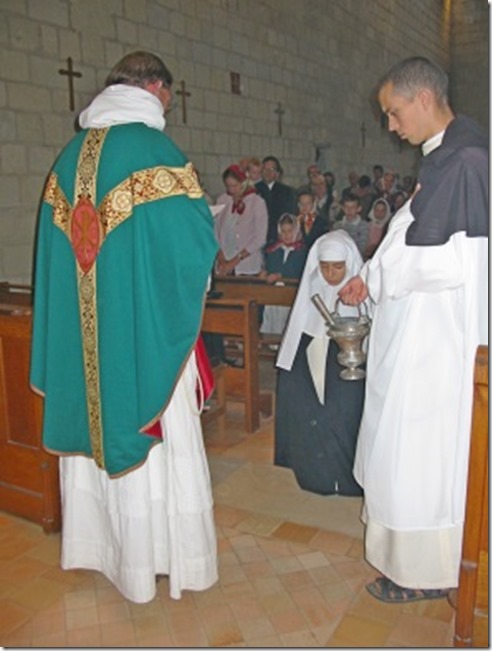 September 13th: The school year begins once again for both our grade school and our boarding school.

The Covidian Crisis brings along with it many delays. Among others, the construction companies are taking much longer to respond to our bidding invitations.

We are also considering enclosing the woods of our property with a real fence. Yet, it remains to be decided before God which worksites are the most important, taking into account our present means.