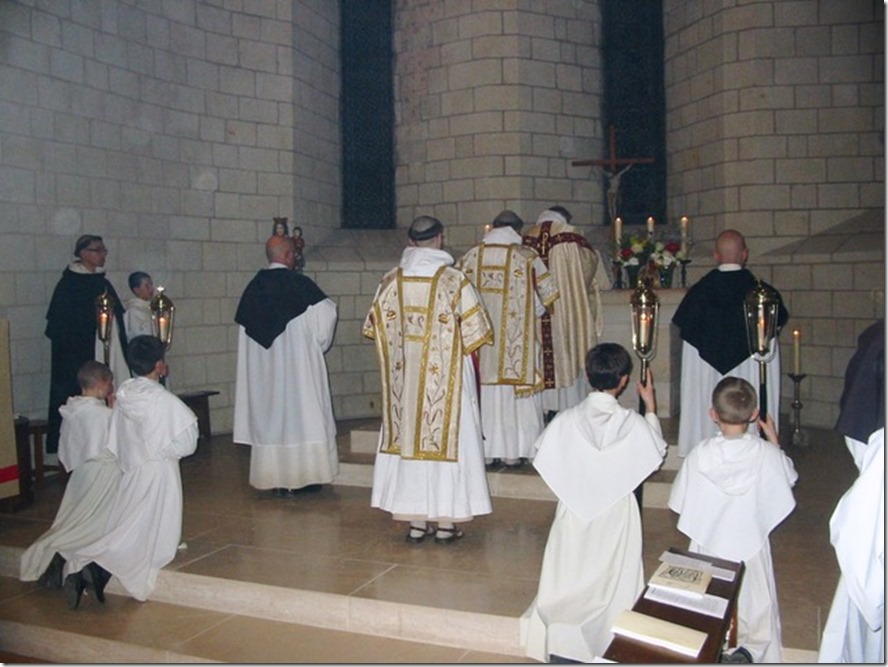 Immediately following the Protestant revolt against the authority of the Church, Germany is inundated with blood. Mathias Harlem, an Anabaptist Protestant, takes charge of a ferocious mob, ordering the pillage of Churches, the destruction of sacred vestments and art, and the burning of all books, except for the Bible.

Setting himself up at Münster, which he names “Mount Zion,” he commands the habitants to bring him all the gold, silver and jewels they possess. He has it all placed in a common treasury, and appoints deacons in charge of the distribution. All his disciples are obligated to eat in common, live in perfect equality, and… prepare themselves for imminent war, because, as he informed them, “they will soon have to leave Mount Zion, and conquer all the nations of the Earth.” He perishes in a foolish enterprise, wanting to exterminate an entire army with a handful of men, as a “new Gideon.”

The delirium of John of Leyden

Becold, better known under the name of John of Leyden, is the heir of Mathias’ fanaticism. A tailor by profession, one day he starts running in the streets, naked, shouting, “Behold the king of Zion cometh!” Returning to his house, he locks himself up for three days, and pretends to be mute when anyone tries to speak with him. Like a new Zachary, he asks (using signs) that he be brought a writing tablet. He then writes that he has received a divine revelation: after the manner of the ancient Hebrews, the people must be governed by “judges”. Twelve men amongst his most faithful disciples are chosen, to whom he leaves the task of taking control of the city. As soon as their power is unquestioned, his authority as a new prophet is assured. However, his ambition doesn’t stop there: he must be proclaimed king, with all the pomp and majesty suited to such a dignity. So blind was the fanaticism of his partisans that the goal is easily attained. He initiates to the art of prophecy a common goldsmith, who then presents himself to the judges, declaring: “Behold the will of the Eternal Lord God: just as in the days of old I established Saul over Israel, and after him, David, who was only a simple shepherd, today I establish Becold, my prophet, as the king of Zion.”

After a bit of haggling with the judges – who at first refuse to abdicate – and the help of yet another “prophet” who presents him with an unsheathed sword, representing his “power of justice” to extend the reign of Zion to the four corners of the earth, Becold is solemnly crowned on June 24th, 1534.

The Protestants condemn these horrors, but do they have the right? Who rejected the authority of the Church and delivered the Bible over to the whims of the people? The Anabaptists saw this very clearly; when Luther condemned them, they were filled with indignation. What right did he who established the principle of free examination have to limit its consequences?

Luther found in the Bible that the Pope was the Antichrist, and gave himself the mission to destroy his authority. Why couldn’t the Anabaptists rebel against Luther?

Herman preaches the massacre of priests and all the magistrates of the world. — David George claims to bring a new and perfect doctrine, because that of the Bible was faulty: he is “the true son of God.” — Nicolas rejects the virtue of Faith and any form of worship as useless; he also demolishes all morals by teaching that we must persevere in sin so that “grace may abound.” — Hacket claims that “the spirit of the Messiah is upon him,” and sends two of his disciples to run through the streets of London, crying out: “Behold the Christ cometh, a vessel in his hand!”

All these deplorable spectacles, and a hundred others that we could cite, are proof enough that Protestantism nourishes and exacerbates fanaticism. It would take volumes to describe all the extravagances and crimes of the likes of Venner, Fox, William Sympson, J. Naylor, the Count Zinzendorf, Wesley, the Baron of Swedenborg et alii.

This is no exaggeration. All you have to do is to consult the history books written not only by Catholics, but by the Protestants themselves. You’ll find a multitude of facts witnessing to this truth: public actions, perpetrated in the light of day, in populous cities, at times not very distant from ours.

And don’t think that this source of fanaticism is close to drying up; it seems on the contrary to be going strong…

September 9th: Parent-Teacher meeting and start of a new school year for Saint Philomena Primary School, Saint Thomas Boys’ High School… and Saint Rose of Lima Girls’ Middle School. With four students in sixth grade (the same number as Saint Thomas High School in its first year), this new girls’ school has opened its doors just down the road from the Friary. Run by a Dominican teaching sister formerly from the Congregation of Saint Pré, under the direction of the Friary, this new establishment hopes to complete the educational possibilities for the many families installed in the area (who up until now were lacking a secondary school for their girls). Please keep this in your prayers!

September 15th: Fr. Angelico is in Ambérieux (near Lyons) where he blesses the marriage of two of our tertiaries. After which he flies off to England to replace Fr. King for Mass in Southport.

September 22nd: On the feast of St. Maurice and companions, soldiers of the Theban legion martyred in 286, and patrons of the diocese of Angers, Bishop Williamson confers the sub-deaconate on our Brother Alan (from Quebec). On the same day, arrival of Fr. N’Dong Ondo from Gabon, who will spend a few weeks at the Friary to rest up before returning to his busy apostolate in Africa.

October 8th: Fr. Prior gives a conference in Paris presenting the Little Catechism on Vatican II. “The result of this Council is much worse than the French Revolution. The seminaries, novitiates and churches have been emptied. Preaching has become ecumenical and liberal; the catechisms have been changed and are no longer Catholic.” (Archbp. Lefebvre, Spiritual Journey) For this reason alone, the false “canonization” on October 14th of Pope Paul VI (who presided the council) is a tremendous scandal, demanding reparation.

This Little Catechism on Vatican II is available in English on our website.

October 29th: Fr. Louis-Marie gives a conference in Paris on “Protestant Terrorism.” It is too little known that Protestantism was only able to impose itself upon half of Europe by violence, pillage, tyranny and massacres. 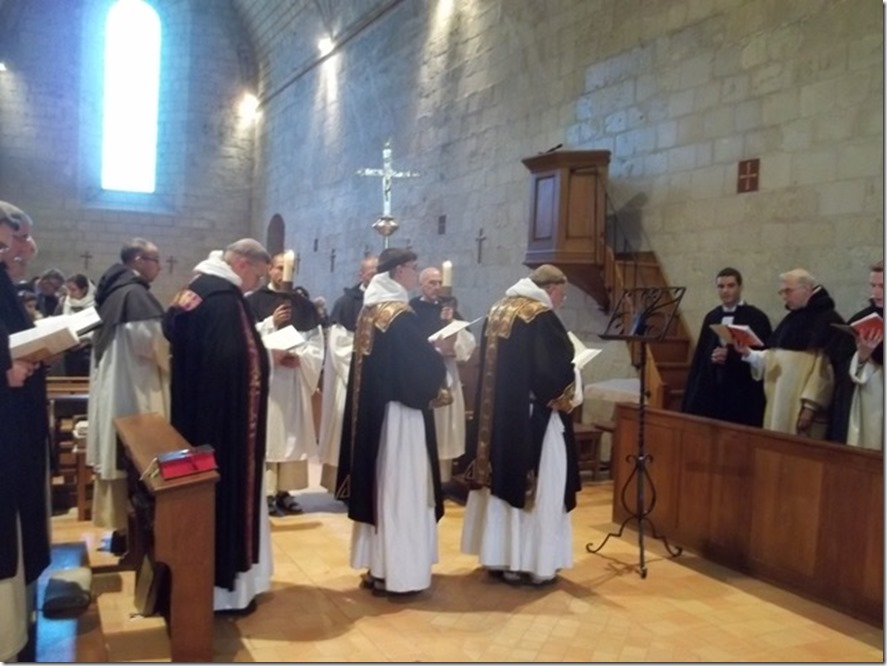 First station of the All Souls’ Day procession

November 2nd: Fr. Angelico blesses a roadside Calvary restored by a parishioner and his Association for the Safeguard of Religious Heritage.

November 4th: Fr. Rémi Picot, who exercises his apostolate in Asia and Australia, comes to spend two weeks on retreat at the Friary.

November 11th: Fr. Terence accompanies a group of students from Saint Thomas Boys’ School for a ceremony organized by the Mayor of Avrillé in commemoration of the Armistice of 1918. Let us pray for the patriots fallen on the battlefield, but without forgetting that the horrible bloodbath of WWI served to destroy the last Catholic empire (Austro-Hungarian Empire), permitted communism to take control of Russia, and ended in a false, masonic “peace,” which prepared the way for WWII.

November 16th: Ceremony of “Inauguration” for the 15 seniors of the class of 2019 at the Boys’ School. This year, the boys chose Charles and Zita of Hapsburg (the last Catholic Emperor and Empress) as their patrons. Fr. Morgan, who preached a retreat to the boys focusing on the lives of these exemplary Christians, is present.

Fr. Aloïs Brühwiler comes for a week-long retreat at the Friary, before resuming his apostolate in the Valais (Switzerland).

November 25th: The annual winter market to raise money for the Primary School is a happy success, thanks to the hard-working volunteers. It was also an opportunity for some of the newer families to integrate themselves into the parish.

December 8th: Procession through the streets of Angers in honor of the Immaculate Conception. 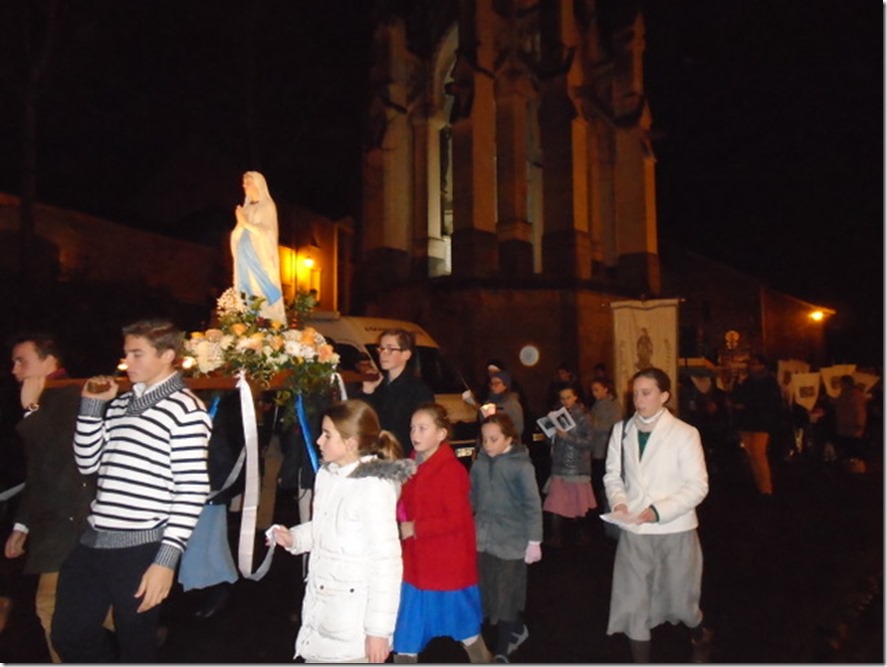 The land behind the Boys’ School has been transformed into a level, well-drained playing field to be used for various athletic activities (once the new turf grows in). 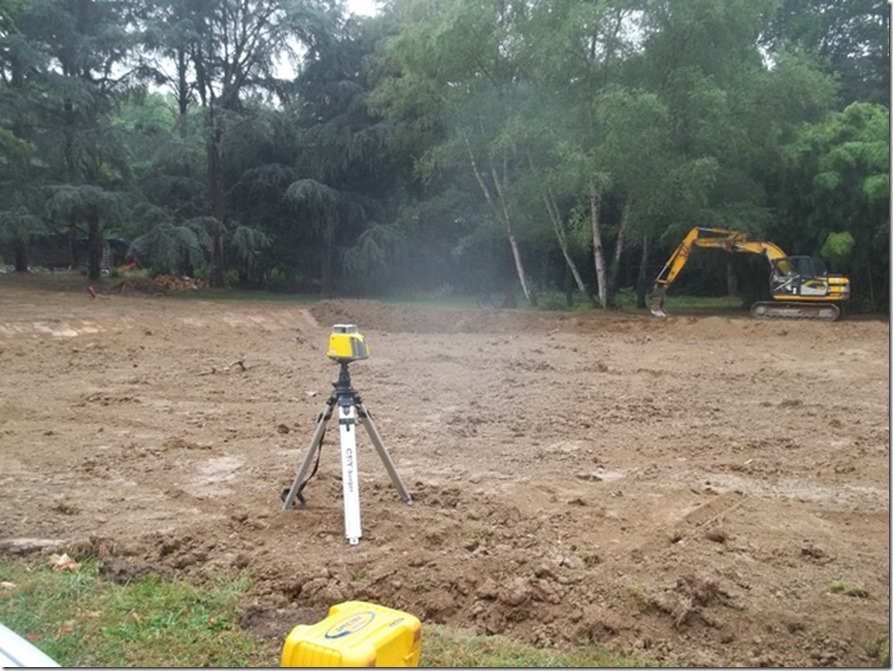 For the new parish hall, we have finally come to an agreement with Bâtiments de France (the commission whose authorization is necessary for construction), and the architect is putting the last touches on the blue prints. As soon as the construction permit is officially granted, the work will get started.

This last sentence is false and insulting toward the Blessed Virgin Mary. She was born a saint, and was even a saint from the very moment of Her Conception. 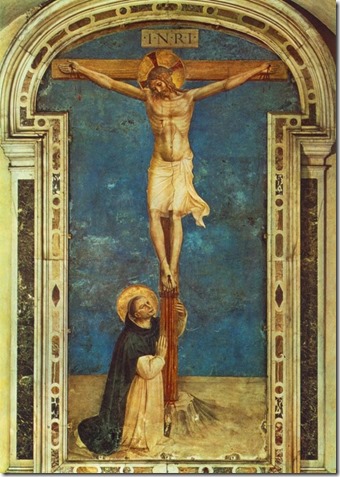