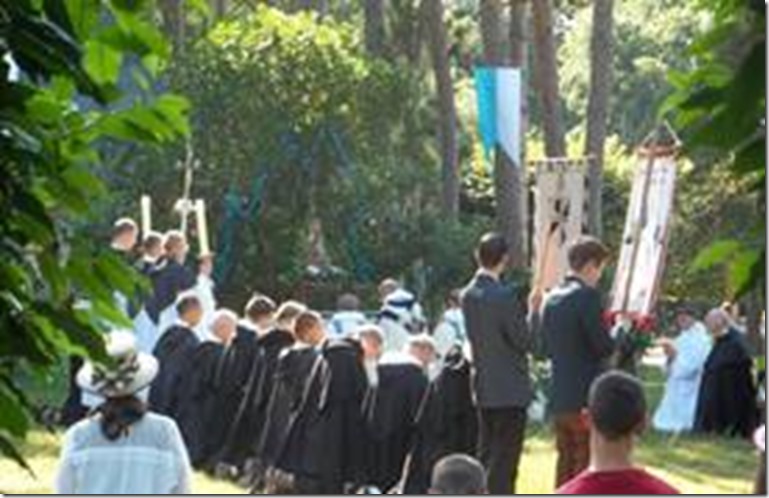 Procession on August 15th: renewal of King Louis XIII’s vow consecrating France to the Blessed Virgin Mary, after his victory over the Protestants

Delirium and fanaticism are a natural component of Protestantism.  One could write volumes to prove it, but a quick look at the facts will suffice here.

Luther discussed religion with the Devil

Let’s start with Luther.  What could be more insane than to claim to be taught by the Devil, to glory in it, and to establish a new doctrine based on this rather doubtful (to say the least!) authority?  This is, however, exactly what was done by the founder of Protestantism, Luther himself, who left written accounts of his interview with Satan.

Whether the apparition was real or just a nightmarish hallucination during a long night troubled by fever, it’s impossible to push fanaticism any further than to brag about being instructed by such a teacher.

Luther tells us himself that he had several colloquies with the Devil.  The most noteworthy is the vision – which he recounts very seriously – where Satan assailed Luther with arguments against the Mass celebrated privately, without the faithful.  Luther depicts the scene in vivid colors.  He awakes in the middle of the night, and Satan appears to him:  he sweats, trembles;  his heart is beating terribly.  Nevertheless, a discussion is engaged.  The Devil shows himself to be such a good dialectician that Luther is vanquished, and left with no response.  The Devil’s logic was accompanied by a voice so terrifying that the blood froze in poor Luther’s veins.  He said:

“I then understood how it is that people often die at the dawning of day; it’s because the Devil can kill or suffocate them, and, without going so far as that, when he argues with them, he puts them in such difficulty that he can thus cause their death:  this is what I have often experienced myself.”

Zwingli helped by a phantom

Another example of this folly:  the phantom that appeared to Zwingli, the founder of Protestantism in Switzerland.  This heresiarch wanted to deny the Real Presence of Our Lord in the Eucharist.  He claimed that the consecrated bread and wine are nothing more than the sign of the Body and Blood of Christ.  However, he was bothered by the texts of Sacred Scripture that clearly affirm the contrary.  All of a sudden, just as he was imagining a discussion with the secretary of the town, a black or white phantom (as he says himself), appeared to him and provided him with the desired explanation.

This edifying story comes from Zwingli himself!

Melanchthon showed himself to be strangely credulous when it came to dreams, extraordinary phenomena and astrological predictions.  His letters are full of examples.  During the Diet of Augsburg, Melanchthon interpreted various happenings in Rome (the flooding of the Tiber and the birth of a monstrous mule having the foot of a crane), and in the territory of Augsburg (the birth of a calf with two heads) as favorable omens for the new Gospel.  These events were for him the unquestionable announcement of the imminent ruin of Rome and the triumph of Protestantism.  He affirms this very seriously to Luther in a letter.

He would read his daughter’s horoscope for her, and trembled in seeing that Mars “manifested a dreadful aspect”.  He was also terrified by the flames of a comet appearing in the northern sky.  The astrologists predicted that the stars would be more favorable to theological debates in autumn, and that sufficed to console him concerning the delays in the conferences of Augsburg.  These “reasons” were also good enough to convince his friends, the leaders of the Protestant faction.

Someone having predicted that Melanchthon would be shipwrecked in the Baltic Sea, he refused to embark.  A certain Franciscan had prophesied that the power of the Pope was going to disappear, and that in the year 1600 the Turks would become the masters of Italy and Germany: Melanchthon glorified in having the original version of the prophecy.  Moreover, the earthquakes which occur shortly after reinforce him in this belief.

May 2nd: Feast of the Ascension. After their spiritual retreat, eleven students from the Boys’ School make their “Solemn Communion” and pronounce their profession of Faith and perseverance. 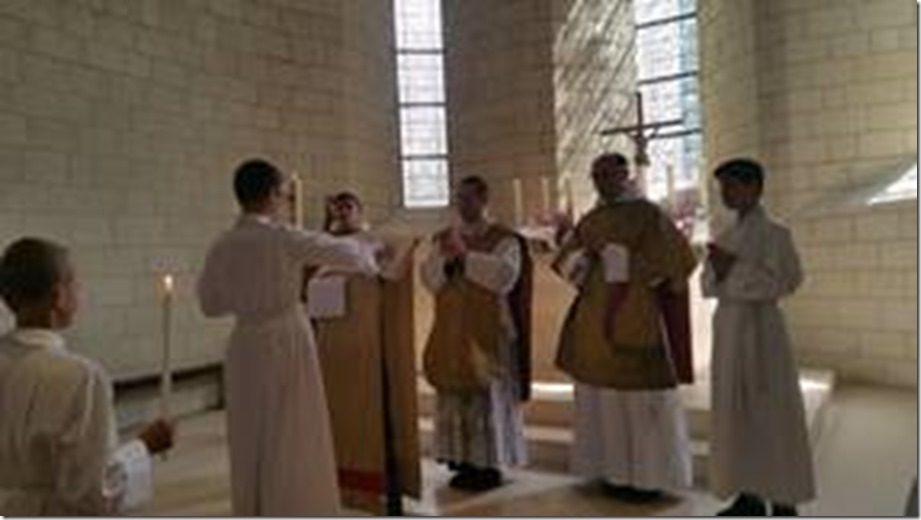 May 10th:  Mr. Jean-Yves Nerriec gives a conference on the Angelus Mission, an association he founded for the street evangelization of Muslims.

May 20th: Pentecost Sunday: Fr. Angelico joins Fr. Salenave and the seminarians in Normandy for a gathering of the Combat for the Faith near Mont St. Michel.

June 3rd: Fr. Marie-Laurent and Br. Alan lead a group of students from the military school of La Flèche on a pilgrimage to Our Lady of Béhuard.  In the afternoon: public Corpus Christi procession.

June 22nd – June 29th:  Fr. Angelico is in Scotland to visit the first Dominican tertiary attached to Avrillé:  Sr. Catherine of Sienna (Miss Ruth McQuillan).  Since her profession on August 22nd, 1994, Sister has never wavered in her fidelity to the Rule, nor in her affection for the Friary.  At the same time, Father was able to visit with Fr. King and his group of faithful in the Edinburgh/Glasgow area.

July 3rd:  Arrival of Fr. Tiago O.C.D., the superior of a Carmelite community based in Brazil who recently discovered Tradition, and who is looking for a solid religious and doctrinal formation.

July 8th:  Fr. Terence is in New York to represent the community for the 30th anniversary celebration of Bishop Williamson’s episcopal consecration.

– Men’s retreat (with help from Fr. Ballini); another retreat for couples

– Summer Camps:  in Anjou: Our Lady of Fatima Youth Group (primary school boys and girls) and Valiant Souls (adolescent girls), with Fr. Hyacinthe-Marie;  in Lourdes: the Cadets of the Sacred Heart, with Fr. Terence

August 14th: Following our annual retreat, we have the joy of witnessing Brothers Michael-Mary and Augustine-Mary pronounce their first temporary vows for three years.  The same day, Brothers Alan and Agostinho pronounce their solemn vows, which means that the road is now open to the major orders (sub-diaconate, diaconate and priesthood)!

August 15th: Feast of the Assumption: Solemn High Mass, Conference for the faithful, and procession in the streets.

August 16th – 20th: Fathers Marie-Dominique and Angelico lead a pilgrimage of about 30 tertiaries to Puy-en-Velay, France’s oldest Marian shrine, and to Langeac (monastery of Bl. Agnes de Langeac, a Dominican nun instrumental in the reform of priests in the 17th century). 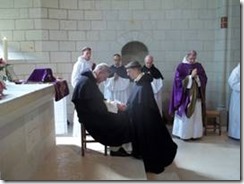 One by one, the Brothers pronounce their vows in the hands of Fr. Prior, holding a copy of the Constitutions

August 21st – 25th:  For the student Brothers, seminarians and lay professors: Latinitas session at the Friary, with Professor William Little: 5 days of spoken Latin (grammatical exercises, games, songs, during the meals and recreation…).

Work on the new Parish Hall is still suspended, due to the recent modifications in view of reducing the final cost. We ask for your

prayers and financial help, so that the project may finally commence early next year.

In the meantime, work has continued for the upkeep and improvement of the school grounds, both for Saint Thomas Aquinas High School, and for Saint Philomena Elementary. 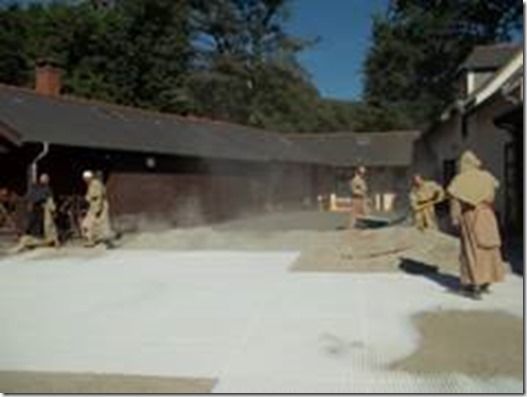 The novices working on the recreation court for St. Philomena School

“How is it that seemingly ‘magisterial’ documents can contain errors and even heresies?”

Response:  It is because of the refusal, on the part of the conciliar pontiffs, to use the magisterial power1.  It is not, therefore, a question of the disappearance of the magisterial power (as the ‘sedevacantists’ say), but of the refusal to use it.  This refusal reduces these seemingly magisterial and public texts to the rank of simply private writings.  The liberalism of the modern Popes – especially the affirmation of “religious liberty” – puts an obex [an obstacle], not to the possession of magisterial power, but to its exercise.

However, we must specify that it isn’t the profession of just any error or heresy which constitutes an obstacle to the exercise of magisterial power, and not even liberalism in general, but the present error of modernism, which claims that truth is subjective (that is, depending on each person), and therefore cannot be imposed on anyone by the Church. 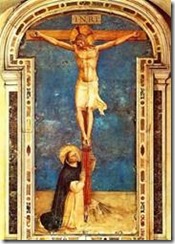