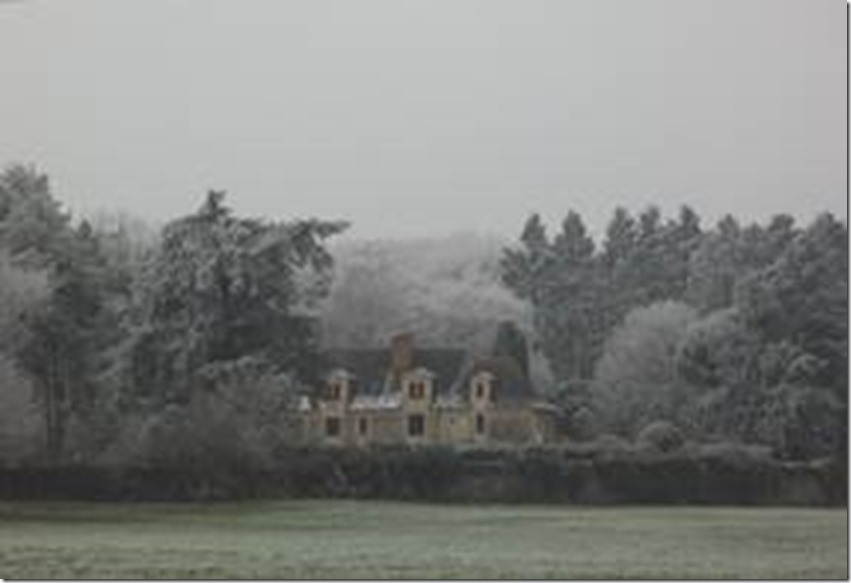 When Archbishop Lefebvre founded the Society of Saint Pius X in 1970, he had obtained its canonical erection as a “pious union” from Bishop Charrière of Fribourg, Switzerland.  The Archbishop’s work remained canonically recog­nized for five years.

However, on November 21st, 1974, after a canonical visit of Ecône by two envoys from Rome, Archbishop Lefebvre published a declaration manifesting his refusal “to follow the Rome of neo-Modernist and neo-Protestant tendencies which were clearly evident in the Second Vatican Council and, after the Council, in all the reforms which issued from it.”

From that point forward, the dividing line between the two “churches” was drawn.  Shortly after, the “Rome of neo-Modernist and neo-Protestant tendencies” was given the name of the “conciliar church” by Bishop Benelli [letter addressed to the Archbishop on behalf of Pope Paul VI].  It has kept this name ever since.

The canonical “suppression” of the SSPX was decreed by Bishop Mamie, on May 6th, 1975.  Archbishop Lefebvre rightly stated that it was “irregular, and in any case, unjust.”

This “suppression” was therefore consid­ered as null and void by Archbishop Lefebvre and all those who follow the rules of the Catholic Church, whereas it was deemed valid by the representatives of the conciliar church.

Recently, however, there has been more and more talk of a “canonical recognition” of the SSPX from the present authorities in the Vatican.  Can such recognition be accepted?

Per se, canonical regularity in the Catho­lic Church is something that is good, and even necessary.  Archbishop Lefebvre sought this reg­ularity in 1970, and obtained it.  Nevertheless, today, if a canonical recognition were to be ac­corded, it would be in the framework of the new Code of Canon Law.  It is in this framework that the Pope has granted jurisdiction for marriages celebrated by priests of the SSPX.

That reason alone would suffice in order to refuse this recognition:

“We cannot content ourselves with particular guidelines for the Soci­ety; we refuse this new Code of Canon Law be­cause it is contrary to the common good of the entire Church, [which is what] we want to pro­tect.” [Fr. Jean-Michel Gleize, Courrier de Rome n° 499, May 2017]

We may add that under present circum­stances, there are other disadvantages.  Just to name a few:

— It would make us enter into the con­ciliar pluralism, with Tradition being recognized on an equal footing with the Charismatic move­ments, the Focolari, Opus Dei, etc.  This would put Truth on a par with error, at least in the public opinion.

— It would bring into our chapels faith­ful who are determined to remain conciliar, modernist and liberal, along with all that this implies regarding their lifestyle (because bad ideas lead to bad morals).

— It would necessarily reduce any at­tacks against the errors professed by the authori­ties under which we would then directly find ourselves.  It’s rather easy for all to see that the superiors of the SSPX have already diminished their criticisms of the present errors coming from Rome (Year of Luther, Amoris Laetitia, etc.).

—Lastly, such a canonical recognition would place us directly under the authority of superiors who are themselves under Freemasonic influ­ence.  Indeed, various studies published in Le Sel de la Terre have shown that the conciliar church is an instrument in the hands of Freemasonry to force Catholics to work toward the establishment of the New World Order, willingly or not.  (See the editorial n° 101, summer 2017.)   Providence permitted Archbishop Lefebvre and those who followed him to be exempt from this Freema­sonic influence: it would now be a grave impru­dence to subject ourselves to it voluntarily.  Freemasonry was born exactly three centuries ago (June 24th, 1717).   After having destroyed all the Christian states (with the revolutions of the 18th and 19th centuries), and subjugating the Church (with the plan of the Alta Vendita, accom­plished by Vatican II), will Freemasonry succeed in spreading its influence over the work of Arch­bishop Lefebvre?  This would certainly be its ap­parent triumph on earth.

Consequently, a “canonical solution” can only be foreseen in the case of a Rome that has converted doctrinally.  Moreover, this conversion will have to be proven by concrete efforts to work for the social reign of Our Lord Jesus Christ, while fighting against the adversaries of this reign.

Last June 24th marked the 300th anniver­sary of the foundation of Freemasonry.  This sect constitutes a sort of “Counter-Church” offering worship to Satan (See especially the book by Jean-Claude Lozac’hmeur, Les Origines occultists de la Francmaçon­nerie).  Msgr. Henri Delassus, author of the mon­umental work, The Anti-Christian Conspiracy — The Masonic Temple Wanting to Build Itself upon the Ruins of the Catholic Church (1910), made a re­markable analy­sis of the progression of this Lu­ciferian cult as a preparation of the reign of the Antichrist:

Just as in pagan times there were se­cret ceremonies and an esoteric doctrine that were known only to the “initiated”, leaving to the crowd of “ordinary men” the things which they could handle, giving satisfaction to their religious instincts in a sort of natu­ral­ism, we see reborn today certain prac­tices and dogmas that constitute a properly Lu­ciferian religion for the “initiated”, whereas the public is little by little led to a purely naturalistic religion. […]

This is not the first time that Satanism has invaded Christianity.

In the 15th century, the Renaissance, which was the first manifestation of the anti-Christian conspiracy, was preceded by an extraordinary development of magic.  It grew everywhere that Protestantism took hold, and this led to an epidemic of witch­craft that throughout the 17th century was a night­mare for Germany, England and Scot­land, while the Latin countries remained practi­cally untouched.

The Revolution, as well, was preceded by a fever of Satanism.  Magnetizers, necro­mancies, as they were called, showed up everywhere. The corrupted nobles had themselves initiated in rites where Satan was invoked, and in the towns as well as in the cities people gave themselves up to all kinds of occult practices.

But never, since the times of paganism, has Satan been as alive and active as he is today, hav­ing been invited back into the domain from which the Cross of the Divine Redeemer had chased him away. (pp. 723-725)

August 16th:  After a beautiful feast of the As­sumption, with its Solemn High Mass and proces­sion, it’s time for Father Reginald and our two Brazilian Brothers to leave on a month-long mis­sion to Brazil: a total of 2,500 miles by car visit­ing the faithful of various Mass centers.

September 2nd and 3rd:  Five Fathers attend the annual Chiré-en-Montreuil book fair, in or­der to represent our community.  A conference given by Fr. Louis-Marie was a good opportunity to make known to the public some of the various books and articles published this year by Le Sel de la Terre concerning the Protestant Revolution and its disastrous effects on souls and society.  A group of several students from the Boys’ School came along to help out the organizers.

September:  Back to school for the children… and for the Fathers and Brothers who take care of the Primary school, the Boys’ school, Our Lady of Fatima youth club, etc.

September 4th:  Fr. de Mérode comes to stay for the week, for his annual retreat.

September 10th: Fr. Marie-Dominique gives a conference on Saint Dominic for about 30 mem­bers of the “Friends of the Sacred Heart,” a youth group of the Combat for the Faith.

September 11th: Three of our tertiaries from the Czech Republic are among us for several days, happy to immerse themselves in the prayerful atmosphere of the Friary, and the Dominican Liturgy.

September 14th: Father Marie-Dominique leaves to preach the start-of-the-school-year retreat for the seminarians of St. Louis-Marie Grignion de Montfort Seminary.  It’s also the official start of the school year for our student brothers.

September 23rd/24th: Third Order meeting in Chartres/Paris.  In the weeks to follow, Brittany, Alsace, Lyons, and Avrillé will have their turn at starting up a new year of activities.

October 25th:  We have the pleasure of re­ceiving H.E. Bishop Zendejas for a few days be­fore he goes on to Fatima for the pilgrimage of Christ the King.

December 22nd – January 7th: Fathers Marie-Dominique and Angelico, accompanied by Br. Alphonse-Marie, travel to various Mass centers in North America.  It was the occasion to visit our tertiaries, friends and benefactors, as well as to help out Bishop Zendejas for the Christmas ceremonies.  On the list: South Salem, NY (NYC area);  Emmet, KS;  Houston, TX;  Northome, MN;  Newman Lake, WA;  Buffalo, NY;  Winnipeg, MA (Canada).  Congratulations to the five tertiaries who made their profession in presence of the Fathers during this trip!

We don’t have much news to tell for the moment, except that our building project has been accepted by the municipality. Thanks to your help, we have already gathered a good part of the funds necessary to start building.  The preliminary work (surveys, soil tests, entry roads for the construction vehicles, etc.) should be able to start in the next few weeks. Thank You! 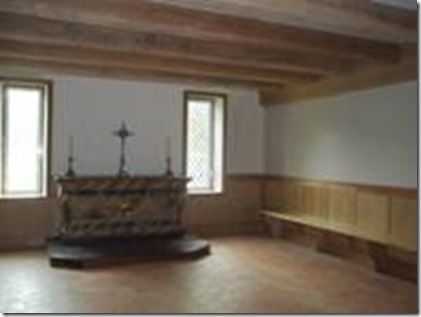 The finished Chapter room, with its new altar. 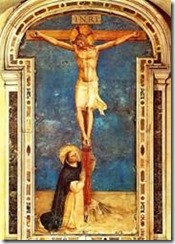