admin Convent Life, Letters to Friends and Benefactors, Our seminary, Retreats, The Convent, The Rosary Confraternity, The Third Order of Penance September 15, 2019Knights of Our Lady 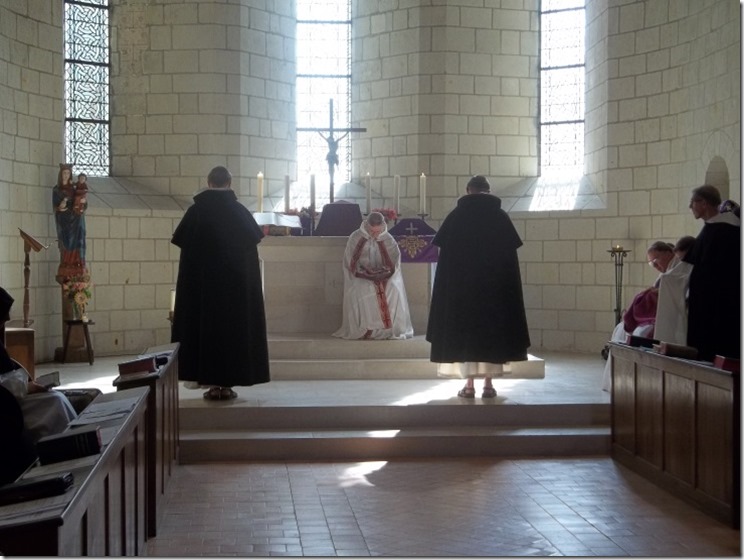 Profession before Fr. Prior (August 14th)

Even though he preached for hours, St. Vincent never tired the faithful. He frequently put them at ease with anecdotes, little stories, comparisons to nature, and even jokes! “Squash,” he said, justifying this practice, “are delicate and delicious, but in order to prevent them from burning and sticking to the pot, it’s necessary, if you want to cook them well, to keep stirring them with a spoon!” 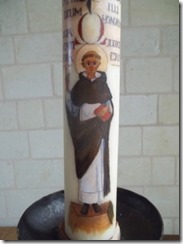 One day an innkeeper asked St. Vincent to preach on the obligation of paying debts, because several clients were behind in their bills. “Alright, I’ll explain how much those who retain the goods of others are guilty; but first, show me the wine you sell.” Once the innkeeper brought out a bottle, St. Vincent had him pour it into his scapular, which he held out in the form of a bowl. The water passed through, and the wine stayed in the scapular: a lot of water, and very little wine…!

A very loquacious woman, on bad terms with her irascible husband, asked St. Vincent for advice on how to “convert him.” “If you want to put an end to your quarrels, go to the porter of our convent and ask him to give you some water from the well in the middle of the cloister. When your husband comes home, put some of this water in your mouth right away, without swallowing, and you’ll see your husband become as gentle as a lamb.”

The woman did as she was told, and when her husband came home grumbling, she took a mouthful of the “miraculous” water. Her husband, seeing that his wife kept her peace without talking back, calmed down himself and thanked God for having changed her heart — and closed her mouth. The same scene repeated itself several times, always with the same happy success. At the end, the woman came to thank St. Vincent, who explained: “The real remedy was not the water from the well, but silence. In the future, keep silent, and you’ll live in peace.”

The hermit and the sack of gold

St. Vincent recounted the story of a saintly hermit who was walking to town one day when he came across a burse of gold coins. He fled immediately, crying out: “Death and tragedy!” A few onlookers asked what he saw, but his only answer was: “There, by the tree — flee while you can!” However, they didn’t take his advice, and taking the gold pieces, they went into town, got drunk and ended up killing each other in a violent dispute.

May 24th: Mr. Jean-Claude Marchon, benefactor of the community, passes away at the age of 91. Mr. Marchon gave up a comfortable apartment in Paris to come and spend his last years doing penance in our Friary. His good humor and edifying example will be sorely missed. (On the 29th: Solemn High Requiem Mass, and burial in the Friary’s cemetery.) R.I.P. 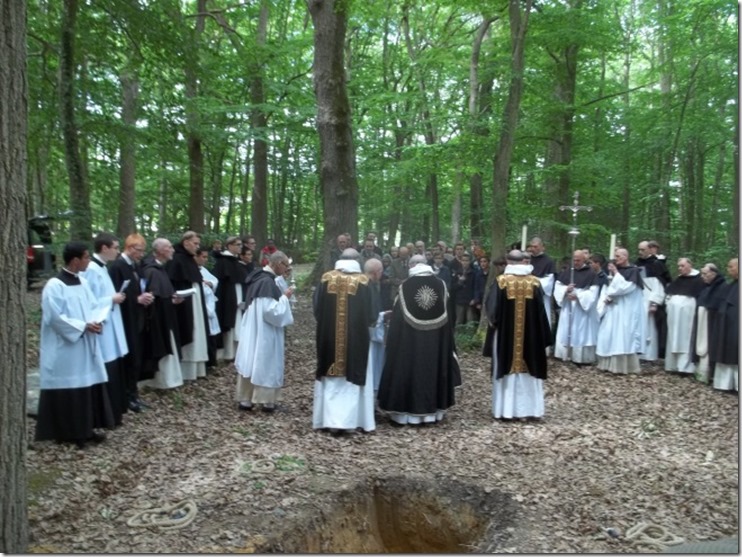 May 26th: Fr. Marie-Dominique is at the Loncheray with the youth group “Friends of the Sacred Heart,” to prepare for their summer camp.

June 2nd: “Solemn Communion” ceremony and public profession of Faith for 6 young ladies of the parish (4 from the school St. Rose of Lima).

The same day, Fathers Marie-Dominique and Hyacinthe-Marie are in Paris for the Third Order.

June 8th-10th: Fr. Marie-Laurent and Br. Michel-Marie represent the Friary at the annual Pentecost pilgrimage of the Combat for the Faith, at the Puy-en-Velay. After the pilgrimage, Bishop Zendejas pays a visit to the Friary on his way back to the U.S.

June 19th: Solemn High Votive Mass of the Sacred Heart celebrated by Fr. Angelico in celebration of the 10th anniversary of his ordination.

June 20th: Fr. Marie-Dominique is in Riddes, Switzerland, at Fr. Epiney’s parish for the 25th anniversary of the ordination of his vicar, Fr. Grenon. Fr. Epiney is a legendary figure in the Fight for Catholic Tradition; it was he who received Archbishop Lefebvre in his parish for the foundation of the seminary of Écône. He has stood firm in his fidelity to the combat of the Archbishop, even at the price of now being ostracized by the superiors of the Society of St. Pius X.

June 23rd: Corpus Christi procession with the presence of Bishop Faure, and presided by Fr. Dominique Rousseau, who recently joined the Combat for the Faith.

June 26th-28th: Exams for the seminarians and our clerical brothers.

July 1st-6th: Fathers Marie-Dominique, Hyacinthe-Marie, and Fr. Ballini preach a retreat at the Friary for 22 men.

July 3rd: Fathers Prior and Louis-Marie, accompanied by Br. Alain, are at the Villeneuve (priory of Fr. Pivert) for a formation session for the “Friends of the Sacred Heart.” 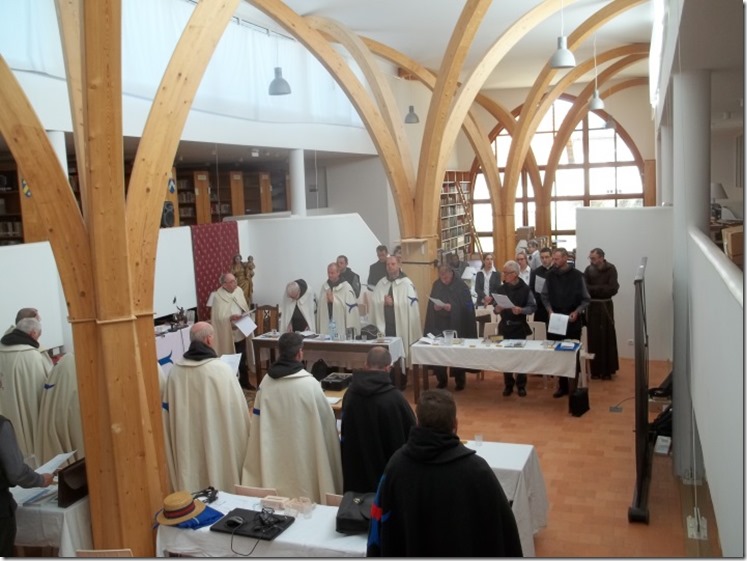 General Chapter of the Knights of Our Lady, held this year in the Friary’s library

July 12th-15th: The Knights of Our Lady hold their 26th annual General Chapter at the Friary. This year they celebrated the 30th anniversary of the restoration of their traditional observance.

July 14th: Fr. Prior and Br. Augustin-Marie are at Saumur for a doctrinal session for a group of tertiaries.

The second half of July: As every summer, several Fathers and Brothers are busy with camps: Fathers Angelico and Hyacinthe-Marie, with Br. Agostinho at the Lion-d’Angers for Our Lady of Fatima’s Youth Group (elementary boys and girls), and the “Valliant Souls” (adolescent girls); Fr. Terence (joined later by Fr. Angelico) and Brothers Alain and Augustin-Marie in Dordogne (near the famous sanctuary of Rocamadour), with the Cadets of the Sacred Heart. Despite the heat wave, the children all went home happy, and hopefully a few steps closer to God.

July 17th: Outing in Tours for the novitiate, with a guided visit by our Greek professor, Mr. Trouillet.

July 20th: The Friary hosts the marriage of a former student of Saint Thomas Aquinas Boys’ school; Fr. Louis-Marie has the honor of celebrating and receiving the vows.

July 22nd-27th: Fathers François-Marie, Marie-Laurent, and Fr. Picot preach a retreat at the Friary for 32 women.

August 2nd: For our table reading, we read the Friary chronicles for July-August-September 1979, to commemorate the 40th anniversary of our definitive installation here at the Friary of La Haye-aux-Bonshommes. Fond memories for the most senior members of the community, and fascinating discoveries for the younger members (many of which were not even born at the time)!

August 4th-12th: Our annual retreat was preached this year by Fr. Morgan, who inspired us with the example of Bl. Dominic Barberi (1792-1849), the Italian Passionist priest who was responsible for a wide movement of conversion to the Catholic Church in England in the 19th century.

August 14th: Vigil of the Assumption: Solemn High Mass, during which our postulant Emmanuel receives the habit of lay brother, and a new name: Brother John. The ceremony also included the first profession of Brothers Pie-Marie and Marie-Thomas, who will now start their philosophy and theology classes with the other clerical brothers. 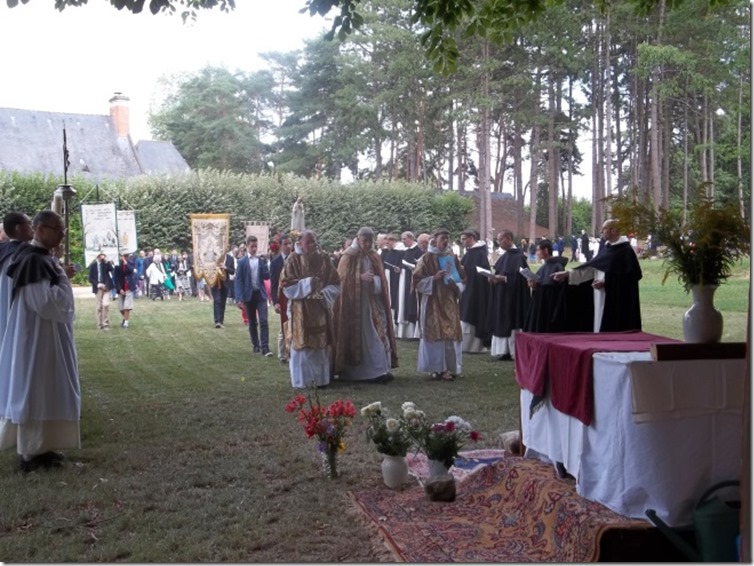 August 15th: Annual Assumption procession, with a large crowd of faithful from all parts of Western France: a big difference from the 6 faithful present for the first procession 40 years ago, when the Fathers just arrived!

Other than a few small maintenance projects and the preparation of a Calvary mount, we don’t have much to announce. Please pray that we may finally obtain the authorization for the construction of the new parish hall with cafeterias for our schools. The lack of space has reached a critical point.

In 2017, The Conference of French Bishops published the latest statistics concerning the Church in France. Compared to the statistics from 1990 (let alone those from before Vat II!), they show clearly that the crisis in the Church is still raging.

What’s more, we have to ask ourselves what kind of formation does this “little rest” have? How many of these souls have actually kept the Catholic Faith? 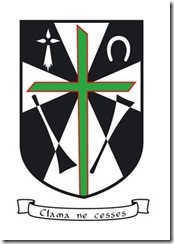 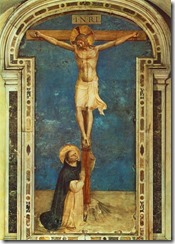